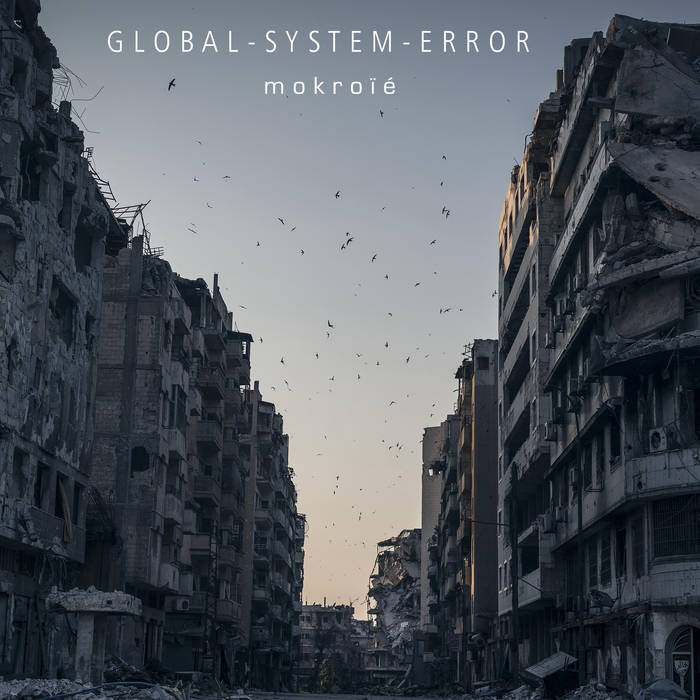 SO THEY WALKED Music Video :
youtu.be/W7b3vdI2egE

With « G L O B A L - S Y S T E M – E R R O R », the new chapter from m o k r o ï é, it's about exploring the atavistic tendency of the world to its self-destruction. The subtitle is moreover explicit :[ man's inability to refrain from war, and the crisis it ensues ].

As always with m o k r o ï é , the idea began with the composing, the programming, and the layering of the instrumentals.
It is not a coincidence to say the least, how seamlessly the vocals fit. Allonymous's emotive, and dynamic voice is quite at home here, and is featured on all four tracks. The hypnotic, full on electro versions are tempered with acoustic versions. Featuring the drumming of Dave Collingwood, or Cyril Atef.
For the visual part, (music-videos / artwork) the goal was to paint humanity in its stark light, relying on Sergey Ponomarev's photos. An original vision and expression that adds to the depth of this project.
He knew Sergey's photographs would be the keystone around which this project would be more heartbreaking and intense.

m o k r o ï é,
is the electro/trip-hop multidisciplinary artistic project created by Francesco Virgilio, with a long collaboration with singer Carol Aplogan. According to his inspirations, Francesco invites musicians and artists of diverse backgrounds depending to the colour of the project. This particular project explores and works electronic music, poetry, spoken verse, song, photographs, video, and live performances.
m o k r o ï é has always been considered by its creator as a living material, a spiritual adventure-related and open to all forms of artistic expression.

Allonymous, a dynamic spoken word artist, emotive singer and songwriter was born and raised in Chicago, he lives now in Paris. Through hard work and serendipity, he met many people, then plays live in guest appearances with The Cinematic Orchestra, Cheick Tidiane Seck, & Les Nubians. He's recorded and toured with Basement Jaxx, Jimi Tenor and Tony Allen. He's the co-lead singer of the psychedelic sextet The Afrorockerz who've opened up for Bilal, and Manu Dibango. Their self titled debut album is in heavy rotation on Radio FIP. Equally he co-leads the rock soul coalition Push Up, including Sandra Nkaké. His tracks have been remixed by Larry Heard, Markus Enochson, Riton, Calvin Harris, & Black Joy.

Sergey Ponomarev is one of today's finest young Russian photojournalists. Best known for his photojournalism works depicting Russian daily life and culture as well, as news images from wars and conflicts in Middle East including Syria, Gaza, Lebanon, Egypt and Libya. Sergey has won many international and domestic photography awards. Most recently, he won first place prize, in the General News category at World Press Photo contest for European Refugee crisis, and then the prestigious Pulitzer Prize for Breaking News Photography.

Dave Collingwood (add. drums on « Because [acoustic]) » is a drummer based in Bristol, UK. He played live and in studio for many years for artists such as Yann Tiersen, Neil Davidge (Massive Attack) and Gravenhurst. As an experienced producer, Dave has recorded, mixed and mastered many albums, including his own, in his home studio in Bristol.

Bandcamp Daily  your guide to the world of Bandcamp

Serena Cherry debuts her black metal project, plus a Pick from the Crypt block from Svalbard